In modern cell biology and light microscopy, immunofluorescence is a workhorse experiment. The same way antibodies can recognise foreign pathogens in an animal, so the specificity of antibodies can be used to label specific targets within the cell. When antibodies are bound to a fluorophore of your choice, and in combination with light microscopy, this makes for a versatile platform for research and diagnostics.

Most small-dye based fluorophores that are used in combination with antibodies suffer from a limitation; hit them with enough light and you irreversibly damage the fluorochrome, rendering the dye ‘invisible’ or photobleached. This property is the basis of several biophysical techniques such as Fluorescence Recovery After Photobleaching (FRAP) but for routine imaging it is largely an unwanted property.

Over 20 years ago, a new class of fluorescent conjugate was introduced in the form of Quantum Dots (QDots); semiconductor nanocrystals that promised increased brightness, a broad excitation and narrow emission band (good when using multi-channel imaging) and most importantly: no photobleaching. They were hailed as a game changer: “When the methods are worked out, they’ll be used instantly” (ref). With the expectation that they would “…soon be a standard biological tool” (ref).

So what happened? Check the published literature or walk into any imaging lab today and you’ll find antibodies conjugated to all manner of small dyes from FITC and rhodamine to Cyanine and Alexa dyes. Rarely will you find QDot-conjugated antibodies used despite them being commercially available. Why would people shun a technology that seemingly provides so many advantages?

Figure 3 from doi:10.3762/bjnano.8.125 shows Tubulin simultaneously labelled with small fluorescent dye (A) and QDots (B). Overlay shows Qdot in green and A488 in Magenta. See paper for more details.

The work published in the Beilstein Journal of Nanotechnology (doi: 10.3762/bjnano.8.125) demonstrates a surprising finding. Some targets in the cell such as tubulin (the ‘gold standard’ for QDot labelling) label just as well with the QDot as with the dye (see above). Others however, including nuclear and some focal adhesion targets would only label with the organic dye. 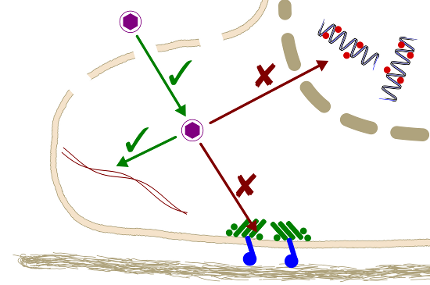 The important question of course is: why the difference in labelling when using Quantum Dots or dyes? This is discussed in more detail in the paper but one explanation the evidence supports is that it is the size of the QDots that hinder their ability to access targets in the nucleus or large protein complexes. This explanation further highlights how little we really know about the 3D structure of protein complexes in the cell and the effect of fixation and permeabilisation upon them. Why for example, can tubulin be labelled with QDots but F-actin cannot, despite them both being abundant filamentous cytosolic structures? At this point we can’t say.

So why is this study important? Publication bias (the preferential publication of ‘positive’ results) has largely hidden the complications of using QDots for immunofluorescence. We and others have spent time and money, trying to optimise and troubleshoot experiments that upon closer study, have no chance of working. We therefore hope that by undertaking and publishing this study, other researchers can be better informed and understand when (or whether) it might be appropriate to use Quantum Dots before embarking on a project.

This paper was published in the Beilstein Journal of Nanotechnology, an Open Access, peer-reviewed journal funded entirely by the Beilstein-Institut. 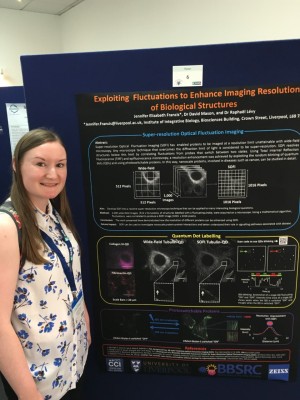 Jennifer presents her poster at the conference

Guest post by Jennifer Francis, PhD student in the Institute of Integrative Biology.

I recently attended the Frontiers in BioImaging conference in London (14th-15th July 2016), organised by the Royal Microscopical Society (RMS). Since this highly specialised conference was relatively small, I got the opportunity to speak one-to-one with experts within the field of super-resolution microscopy about their cutting-edge imaging techniques. A number of microscopy companies, including Carl Zeiss and Leica, also showcased their latest products. The highlight of this trip, was presenting my poster entitled “Exploiting Fluctuations to Enhance Imaging Resolution of Biological Structures“, which generated lots of encouraging interest. Whilst in London, I also got the chance to explore the famous landmarks, whose architecture never fails to impress.

As well as, attending the talks, I also sat in on the Annual General Meeting (AGM), where the new RMS committee was elected. Presenting my research at this conference was a privilege, since I was not only representing the University of Liverpool, but also the Centre for Cell Imaging. I came away from this conference with exciting new ideas to try out in my own research, having made valuable connections. Due to the positive influence of this conference, I have since become a member of the RMS and look forward to attending future events or courses they intend to hold. Lastly, I express gratitude to the Michael Pugh Thomas Endowment Fund for its significant contribution towards the travel expenses to attend this superb conference.