As a part of the Centre for Cell Imaging and a member of the Microscopy and BioImage Analysis community, I occasionally get away to conferences like the recent NEUBIAS training school and symposium in Portugal.

Since having joined Twitter last year (@dn_mason), this is the second conference that I’ve been to, and as a result, was the second time I tried (with reasonable success) to Live Tweet at the conference.

Going right back to basics, Twitter is a platform for broadcasting small messages (of ~140 characters). Some describe it as micro-blogging. To many, the brevity of each tweet is both it’s greatest strength and also one of the most frustrating features.

Live tweeting, is basically the act of providing a running commentary of a seminar, event or even a whole conference. All of the tweets associated with such an event can be tied together using a text-tag called a #hashtag (which starts with a hash like that last one).

You can always go back through the twitter website (or app) and see all of the tweets associated with a hashtag. For example, check out all the #NEUBIAS tweets.

I find myself being asked this question quite a bit. So here are my three main reasons for live tweeting (in no particular order):

I am by no means a twitter expert (a twexpert?) least of all regarding live tweeting, but below are a few tips that might help you to get started:

At least 3% of your screen here is taken up by beard.

The twitter homepage (above) may look nice but it’s really inefficient on space. Once you move to Tweetdeck, you will never look back. Tweetdeck is a very customisable app built into twitter. Compare the image above with the one below. Left to right, I have my home feed (tweets from people I follow), my notifications (people talking directly to me or interacting with my tweets) and the #NEUBIAS hashtag, all on one page. 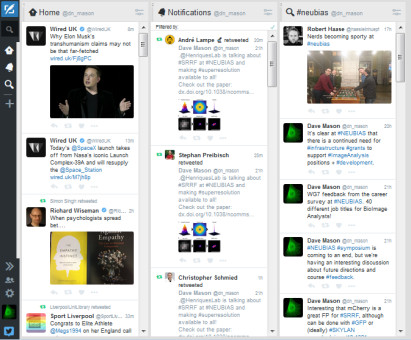 You can add as many columns as you want, so you can follow individual people, hashtags or direct messages, tailoring exactly what you see in each column (likes, retweets, follows &c)

It’s fairly obvious that Twitter is a web application (see endnote #2). So you probably already have a web browser open. Learn how to use and manage tabbed browsing, so you can quickly search for websites (IE the speaker’s homepage), papers (PubMed or your equivalent repository), or relevant links that you might want to come back to later. Learn shortcuts to quickly switch between and close tabs.

Does the speaker use twitter? If it’s not on their title slide, a quick search is a good way to find out:

Assuming you don’t have a ridiculously common name…

If they do, include it in your tweet. It lets them know that people are discussing their work and opens up another avenue for discussion (once they’re off the stage).

Where is @dn_mason 's amazing #NEUBIAS twitter feed?!?! Oh… he's on stage… guess thats the only way to silence his feed… 😉 pic.twitter.com/hZEkJluXfy

This also helps with the visibility and networking mentioned above. Same idea goes for hashtags. If the event has a tag, use it in every tweet. Also, try to hashtag topics that will expose your tweet to others who might find the content interesting. #Don’t #over #do #it #though.

4) Harness the power of images

A tweet with an attached image is more visible and easier for you and others to find later when scrolling down a timeline. I try to add images at least once per logical break, even if they’re screen grabs from a website or company logos.

Get to know how to screengrab, crop, save and upload an image quickly on your platform. Most browsers can open PDFs directly so you don’t need to download and open in an external application to screen grab an interesting figure or notable schematic from a paper. Make sure you include a link (a DOI or URL) so people can put the image in context.

As I said before, a lot of scientists use Twitter. Try to figure out who are the people tweeting at a conference and make sure to follow them to see what they’re talking about. You may find extra insight or perhaps an interesting discussion point in which you can get involved (on or off-line).

Live tweeting is not for everyone, but hopefully I’ve given you some reasons why you might at least want to follow a conference hashtag, even if you don’t contribute. Like any community however, the more people that get involved, the more everyone benefits.

#1: There is a really interesting discussion around this point, which extends to recording and/or streaming a conference. The argument goes that if people can “be at a conference” from their computer why would they ever pay the flight/hotel/conference fee to go to a conference in person? To me, this argument is patently ridiculous. Attending (most) conferences is about being part of a community, and this is a 2-way interaction. Some of the most interesting discussions happen over drinks or at meals, not necessarily during the talks and question periods. I’m fully for recording and streaming talks at conferences, and I seriously doubt that this would impact attendance.

#2: Many people use Twitter on their smart phones. The one and only time I do this is if I want to take a photo and tweet it directly. Otherwise, it’s just too slow and lacking in the editing / lookup tools (eg. good tabbed browsing) and screen real-estate to make the most of tweetdeck. If you can, always use a laptop or maybe (if you’re really good with it) a tablet.